When I was but a wee lass in my pre-yoga 20s, I used to wake up at 4am every day to go to the gym before work. Every day, it was the same group of worker-outers. Always the usual suspects.

Among us was a man in his early 90s, who not only did an hour on the treadmill and lifted weights every day, but he also still worked full time! Not because he had to, but because he truly loved what he did. (They say that is the secret to happiness! Hint, hint!)

Inspiring as he was, I came to the brilliant theory that as long as you show up every day and do the work, there will never be a day when you suddenly can’t show up and do the work.

Ah! The naiveté of youth! 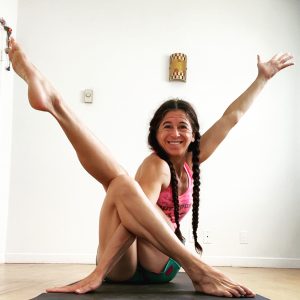 For three decades, I have lived and breathed and worked out and yoga-ed by this notion. No matter how tired or run down I might have been. Regardless of injuries or aches. I showed up every day. Never did I take a day off–or even back off–because I was feeling off. Because if I gave myself that permission, that would open up the slippery slope: tired one day, skip! Tired the next, skip! Not up for it the next, skip! And eventually, that day where I could no longer do what I did every day would inevitably come.

Oh! Life has a way of slapping you silly!

In August I turned 50 and while some (read: many) have told me that I am too old to do the crazy stuff that I do, I have always maintained that age means nothing. And…as long as you do the crazy stuff every single day (say it with me now!), there will never be a day when I will wake up and suddenly not be able to do it all.

And then, out of nowhere, there was a day when I suddenly couldn’t do it all.

My firefly to handstand press, which I had been doing every single day (sometimes as much as ten times consecutively), gone. My pincha pike press, gone. All my OAHS drills, gone. Just to name a few. A very few.

All my muscles were aching and stiff. My joints hurt. For a few weeks, every little asana was its own struggle.

This was not supposed to happen!

Last week, I completely hit a wall. My practice was so off, so weak and unstable, so painful, I seriously thought it was the end of my career.

My body said stop, but my mind said NEVER!

And then it happened. I took a day off. 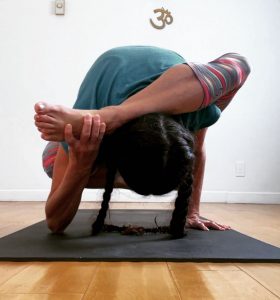 Instead of doing the Full Monty (and then some), I did something I have never done before: one of my own Vimeo classes. A deep stretch class. And you know what? I kicked my ass.

It was not the usual hardcore power practice that I usually do, but a deep and slow grounding sequence to open things up and stretch them out. Turns out it was just what the doctor ordered.

I’m not going to say the next day’s practice was perfect. But it was far stronger than it had been the past few weeks. And this whole week since has been on a positive upward trajectory. Everything magically came back.

I’ll be honest that things are still oddly unstable and inorganic, but they are accessible again. Question now is, so, when do I take another day off?